Concord Theater Ties Up the Fun from “Nine to Five” 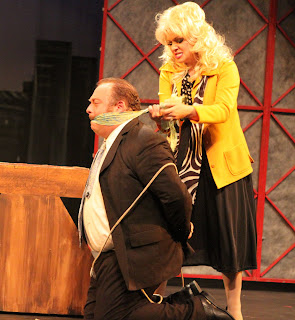 The 1980 hit movie “Nine to Five” brought laughs to audiences everywhere, earning a spot as the 20th highest-grossing comedy film to date.  It’s a lot of fun with three working women who fantasize about revenge on their overbearing and egotistical corporate boss.  They kidnap him, keeping him captive for weeks while they implement improvements in office working conditions.  Dolly Parton penned the title song which won two Grammy Awards and an Oscar nomination.  In the years following the movie’s success, Parton went on to write 20 more songs to bring the show to the stage.  Nine to Five – the Musical opened on Broadway in 2009 and started a national tour in 2010.  The Willows Theatre Company in Concord has earned the honor of presenting the regional premier of this musical, thanks to the talented cast of 20 actors who nail their songs and characters with confidence.

Doralee, the role Parton initiated, is enacted onstage by Sophia Rose Morris,bringing to her role a convincing backwoods accent, a sweet and soaring soprano voice, and a lot of blonde hair.  A second standout in voice and stage presence is Jessica Raaum as the unskilled secretary Judy, suddenly dumped by her husband for a more hip and younger model.  Rounding out the three leads is Elizabeth Palmer, who commands her lead as single mother Violet, the super-talented yet perennial secretary.  These partners-in-crime have powerful voices that solo with strength and conviction, yet blend beautifully in their trios.

The dominating and tattletale office manager, Roz, is brought to life with over-the-top hilarity by Briel Pomerantz.  Roz lusts after their chauvinistic boss, played by Rob Seitelman, who’s only interested in entrapping the unwilling Doralee.  Seitelman is convincingly lascivious and offensive; he draws the audience’s boos with laughter and applause at show’s end.

Director Eric Inman looks young, yet he clearly has the knowledge and chops to pull remarkable performances from his large cast.  The choreography is impressive as well, thanks to the energies of LaTonya Watts and Isaiah Tyrelle and the musical direction of Rachel Robinson.  The Willows Theatre Company, with David Faustina as Managing Director, has a long-standing reputation for excellent shows.  The packed house for preview night proved the audiences agree.  Nine to Five – the Musical is playing now through June 23 on Wednesday through Sunday evenings, with matinees on Wednesdays and Sundays at the Willows Shopping Center off Willow Pass Road and 1975 Diamond Boulevard, Concord.  Tickets ($23-$34) at www.willowstheatre.org or call (925) 798-1300 from noon to five, of course.

Brian Copeland’s The Waiting Period – Laughter in the Darkness

LOVED BY YOU, A Self-Love Story at Brava Theatre