A Spirited and Lively Production of Spunk Sparkles at Cal Shakes 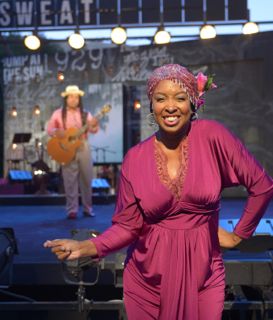 A trio of vignettes of African-American life in the first half of the 20th century, Spunk is a raucous, charming, blues-infused look at love, revenge, jealousy and the fine art of the hustle.

Spunk is an anthology of three folk tales narrated and acted out by the characters and the Guitar Man (Tru) and Blues Speak Woman (Dawn L. Troupe) who transform the tales into a mini-musical. This blend of storytelling and blues makes for a spunky, delightful 90 minutes.

Director Patricia McGregor’s brilliant staging draws on three periods in a single century–the 1920’s when Hurston’s story was written; the 1980’s when it was adapted by George C. Wolfe and 2012, where we now live.  McGregor has granted her production the full force of music, movement, text and expanded theatrical space.

The three tales that make up Spunk are inventively dramatized by having the six actors float back and forth as narrators, chorus and characters while retaining the dialogue of the written page. The Guitar Man is in good hands with Tru and his musical partner, Dawn L. Troupe has the  requisite belting power to do justice to the Blues Speak Woman.

Michael Locher’s multi-level wood set provides an imaginative background for the actors, successfully representing everything from a humble cabin to a Harlem street corner. Callie Floor’s costumes are right on target as are the outrageous Zoot suits.

As music frames the stories so do the two marital tales–“Sweat” about a long-suffering wash woman (Margo Hall) who finally gives her abusive husband (L. Peter Callender) his comeuppance and “The Gilded Six Bits” about a tender loving husband (Aldo Billingslea) who must learn to forgive his young wife (Omoze Idehenry) who betrayed him. These two pieces frame “A Story in Harlem Slang,” a comic sendup of some Harlem hustlers.

Hurston’s stories and Wolfe’s adaptation are remarkably brought to life by Spunk’s vibrant quintet of actors. The show demands versatility; each performer sings, dances and alternately narrates the action and becomes part of it.  Music is an integral part of Spunk, underlying each phrase, plot point and conflict. Composed by Chick Street Man, the play’s score is arguably its main character.

The essence of Spunk is in its details and in its magnificent approach to storytelling. This production draws on a range of influences from African-American culture; from art to modern Harlem architecture as well as the vibrant choreography of Harlem-based Paloma McGregor.

Coming up next at Cal Shakes will be Noel Coward’s Blithe Spirit August 8-September 2 directed by Mark Rucker.

All My Reviews By Year