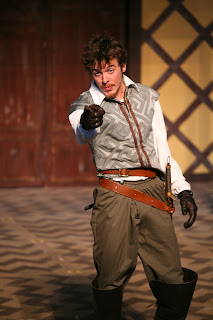 Erik MacRay as the Bastard in King John at Marin Shakespeare Company.

King John was largely popular on the Elizabethan stage, but it is rarely produced today.  In the Victorian era, King John was one of Shakespeare’s most frequently staged plays, in part because its spectacle and pageantry were congenial to the Victorian audiences.  It has been staged four times on Broadway, the last time in 1915.  It was also been staged from 1953-2010 at the Stratford Shakespeare Festival.

Bravely directed by Leslie Schisgall Currier, this rousing story of the battle for the English throne is an action-packed history play full of humor, drama and pathos. When King John (Scott Coopwood) is asked to renounce his throne in favor of his nephew Arthur (Samuel Berston).  According to the director, “King John shows us Englishmen who, for all their faults, are less deceitful, haughty, manipulative, coarse and unethical than the play’s arrogant French, brutish Austrians and hypercritical Italians.”

The action of the play takes place in England and France in courts and on battlefields.  The battle scenes are outstanding taking place among and above the audience seating as well as on stage.

There are many outstanding performances in this production.  Scott Coopwood, in the title role, stands up to his enemies and brings out both the strength and weakness of his character.  Erik MacRay as Philip Faulconbridge, known as the Bastard because he is the illegitimate son of King Richard the Lionheart, has all the natural Plantagenet intelligence and charisma, and stands like a chorus, outside of the action, where he can comment on the foibles and political decisions with insightful wit and to illuminate all the turmoil going on around him.  Liz Sklar as Queen Constance, the mother of young Prince Arthur, makes the laments of Constance her own.  In contrast to his performance as Julius Caesar, Ashland veteran Barry Kraft, gives a performance full of affectation as Philip, King of France.  With a cast of 30 actors, Director Leslie Schisgall Currier, handles her cast with skill and brings to life many surprises along the way.

Abra Berman’s costumes are colorful and accurate period.  Dialect Coach Lynne Soffer is to be commended for the clarity of speech each actor utters in several dialects.  Be sure to see King John which opened Friday, July 13 at the Marin Shakespeare Company’s Forest Meadow’s new and vastly improved outdoor setting.

King John plays through August 12, 2012.  Performances are at 8 p.m. Friday and Saturday and 4 p.m. on Sunday.  The place is Forest Meadow’s Amphitheater, 490 Belle Avenue, Dominican University of California, San Rafael.

Coming up next at Marin Shakespeare will be A Midsummer Night’s Dream directed by Robert Currier, opening July 28 through September 30, 2012.

All Reviews By Month