Room Service was a smash on Broadway and a wild and wacky ride in Orinda! 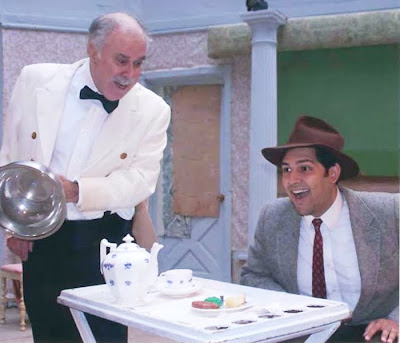 “Room Service”, written by John Murray and Allen Boretz in 1937 is a deliriously funny play that was a smash hit on Broadway in 1937 and 1938, running for 500 performances until the movie rights were purchased by RKO as a comedy vehicle for the wild and wacky Marx Brothers later in 1938. This delightful fun-filled farce is currently playing in the Starlight Amphitheater in downtown Orinda. The show epitomizes the perpetual financial nightmare that producers and writers face all the time, that of finding someone with the money and vision to invest in a show. Generally the less promising the show, the more difficult it becomes to find investors. Ergo, this company has been having a very difficult time finding their money man, their backer.This story opens with theatrical producer Gordon Miller (Geotty Chapple) in his hotel room attempting to read a script while an annoying room service waiter, Sasha (David Weiner) is attempting to convince an uninterested Mr. Miller that he was a very successful actor as a younger man in Russia, who would be perfect as one of the characters in a new play Miller’s actors are rehearsing in another part of the hotel. As the hotel manager and Miller’s brother-in-law, Joseph Gribble (Barry Hunau), barges into the room in a fear induced rage, it quickly becomes evident that Miller has incurred a huge unpaid bill for not only his own room and expenses, but also for approximately 20 other actors and staff, all residing in and sponging off the hotel as well, on a promise to pay pending the receipt of a huge advance from a hypothetical show backer. Gribble smells impending doom as an auditor is due to arrive any moment, an auditor who is bound to discover that a huge credit has been granted to a relative of the manager, a highly unethical action which he knows will end his hotel management career.

Upon learning that the auditor is going to quickly discover the huge deficit and financial deception, Miller initially decides to skip out, leaving his brother-in-law holding the bag. Almost within the next breath, Miller’s associate, Christine Marlowe (Laura Martin-Chapin), charges into the room announcing that she has finally found a financial backer for the show, a very well-known and wealthy individual. Somehow, the mottely theatrical crew has to remain in the hotel for at least 24 hours in order to pull off the deception of being very successful for the benefit of the potential backer, at least until he signs a contract. At the same time the theater company has to avoid the eviction and wrath of the auditor who will soon be on the war path.

As if this is not convoluted enough, the neophyte author of the play, Leo Davis, shows up at the hotel, seeking the next installment of the previously promised advance. Unable to pay the monies due the author, Miller convinces Davis (Charles Guitron) that it would be to his advantage to just hang out here in the hotel, “as Miller’s guest”, until the investor/backer comes and meets all of the principals, including the author.

The play continues to get wilder and wackier by the minute as an ever evolving cast of 16 characters are introduced in various supporting, albeit convoluted roles. I knew you were going to ask, yes, there is a love interest as the very attractive and young manager’s secretary, Hilda Manney (Giuliana Karezis), runs into Leo Davis, and faster than the flash of a zippo lighter, they immediately fall head over heels in love!

As you can probably guess, “Room Service “ is a totally madcap, mile-a-minute, door slamming, head banging play that is a perfect vehicle for the likes of the Marx Brothers or any other erstwhile comedic troupe of actors willing to participate in such absolute dumb fun. Dumb fun it is – – – and other than a few missed lines, gaps in timing and typical community theater faux paux, it is an absolute kick in the comedic pants. The acting for the most part is quite acceptable and several of the more experienced actors are really quite good. Regular admission is $16 for adults other than seniors and children, who pay only $8 per ticket. For seniors, that’s only 50 cents per actor, what a deal! I’m only kidding of course. It is a heck of a deal, a heck of lot of fun and it runs Fridays and Saturdays at 8:30 p.m., with the Sunday, August 5th performance at 4 p.m. and the Thursday, August 9th play at 8 p.m., closing on August 11th. The seating is the old fashioned wood benches on tiered stones on a hillside, amphitheater seating, so I would recommend you bring a folding lawn, beach chair or healthy cushions and dress in layers. If the fog rolls in over the Orinda hills, it can get downright chilly. The Orinda Outdoor Theatre is located in the Orinda Community Center Park, next to the library at 26 Orinda Way, across the street from the Rite Aid Pharmacy and the Orinda Post Office. Call (925) 528-9225 or visit their web site athttp://www.orsvp.org/ or you can email them at info@orsvp.org.

I love amateur, Community Theater, especially being able to meet and greet the hard working actors after the show, as they wait at the stage door to share their excitement and joy with you. I have always loved and supported the Orinda Outdoor Starlight Theater which has no community funding, they do everything out of their love of theater and their desire to share their experience of acting with you! Try it, you may like it!